MPF – Eyal Bensimhon on life as a semi-pro

The Malta Poker Festival: Eyal Bensimhon on life as a semi-pro

Lee Davy sits down with the former 888Poker employee, Eyal Bensimhon, to talk about his first 18-months as a semi-professional poker player, and why he would be a good ambassador for an online poker room looking to try something different. 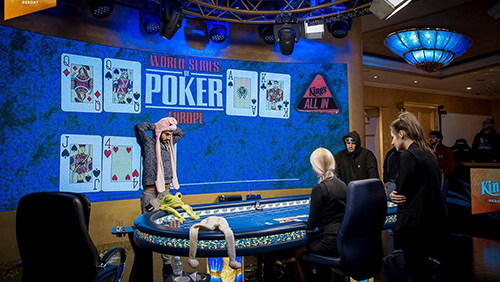 As I look at the windscreen trying to find a chip that some newbie would later pin on me. Phil, from Enterprise Club Car, is talking about the ability of Mark Hughes as a Premier League manager. Phil is a Southampton fan, and, well, Southampton is about as much use as a glass of water in the hands of a deep sea diver.

“I wish they would try something different,” said Phil before handing me the keys.

Mark Hughes falls into the same bracket as Sam Allardyce, Alan Pardew and David Moyes – coaches that seem to flit from Premier League club to Premier League club, making as much progress as Joan of Arc, after they burned her at the stake.

Why settle for the same old, same old.

Why not take a risk, and punt on someone new.

This problem is not a Premier League one. It’s in the world of business, relationships and poker. And it’s the latter that got me thinking about my conversation with Eyal Bensimhon during the Malta Poker Festival.

As is typical in this brave new world, Bensimhon contacted me via email. The 34-year-old was working for 888Poker, and part of his role was to curate content. He had read some of my work and wanted me to provide some articles.

We worked together for 18-months trying to provide the right blend of content that would create value for 888Poker’s customers while hitting the right crotchets and semiquavers in the symphony of SEO.

One of these projects was to write a series of articles focused at helping amateurs become semi-professional, and so it was not without a sense of irony, that I learned at the backend of 2017 that Bensimhon had decided to leave 888Poker and put the theory into practice.

I must have done a decent job.

I caught up with the digital media, content, marketing, and now poker genius, during the Malta Poker Festival, and this is what he had to say. 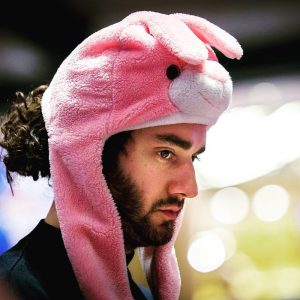 “I am 34-years old who grew up in Israel”, said Bensimhon. “I have worked in marketing and digital media most of my career. My last job was with 888Poker where I got to know more about the theory and strategy of poker by working with some of the best players in the world. Two years ago, I got divorced after six years of marriage and nine years into a relationship, and this is what led to my attempt at fulfilling my dreams. It allowed me to take more risks such as leaving my job and moving to another country without having to think about family.”

I ask about his love of the game?

“I read a lot and worked at a lot of live events,” says Bensimhon, “I remember taking photographs of the bracelets at the World Series in Berlin. I was so excited. Each time I covered a tournament, I felt the urge to play. When poker surrounds you as it did during my time at 888, you feel compelled to play. Had I worked elsewhere my urge to become a poker player might not have surfaced. My role with 888Poker gave me a unique perspective on the game.”

Once upon a time, I left the rail industry to become a semi-professional poker player. Trying to jump from a stable monthly income to the variability of the poker paycheck is as tricky as getting bacon fat off the grill. I wondered how Bensimhon had faired?

“It was the perfect job for me,” said Bensimhon. “I was doing the thing I loved – creating marketing while playing poker. My first goal, when I left 888Poker, was to find steady income from poker but not playing poker. I know I am a profitable player, but I wanted a steady income from outside of the playing aspect of the game. That was my first goal for 2018. The idea was to build a brand with all the talking on the table, and by taking a different approach to the game, and hopefully become an affiliate or get a sponsor, so I would eventually have an income.

“Two months ago, Kenta Poker Group hired me. It’s a group responsible for Rozvadov’s Israeli market. So by working with them, I am an ambassador for Kenta, I do content for them, I am managing the marketing, and I have a steady income and enough time and freedom to play poker. Even if I have a losing month, I have other income. For 2019, my goal is to be sponsored by someone like partypoker, 888Poker or another big brand in poker and earn more money that way.”

Back to my Premier League analogy and Eyal Bensimhon is someone worth taking a punt on when it comes to a sponsorship deal at an online poker room.

The legal issues that constrain Israeli poker may go against him, but there is a chasm separating the Gary Grinders and Daniel Negreanus of the world, and nothing separating Gary from the man sitting opposite me.

It’s a narrative I believe an online poker room could weave to significant effect. The story of the man who decided to leave his job to become a semi-professional poker player, and now makes a living doing that. And not the hackneyed: “guy who never deposited a buck wins multi-millions,” storyline.

“Most poker content out there focuses on the top 50 players,” says Bensimhon.” There are millions of people who play poker, and none of them will get to the level of these people. They have heads like computers. 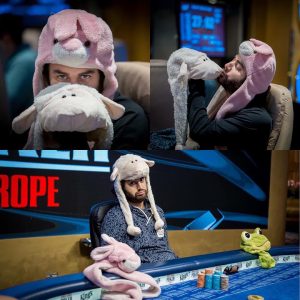 “I think what people are looking for, or need is someone like them. A semi-pro whose goal isn’t to become a millionaire. Today, the people you need to learn from are the semi-pros and the people who earn enough to make a living, not the superstars.”

Before Bensimhon decided to go semi-pro, he had earned $25,000 playing live tournaments over a three-year period. In the 12-18 months since taking the plunge, he has made over $500,000, competing in low buy-in large field events, winning seven competitions, including three World Series of Poker Circuit (WSOPC) gold rings.

So how did he do it?

“The most important aspect for me is goal setting”, said Bensimhon. “I want to make ‘x’ money, per year. How do I do that? I don’t choose expensive destinations. At the beginning of the year, I was sleeping at €12 per night dorm rooms sharing with strangers. If I am going on a poker trip and spending €100-€150 on hotel rooms, it’s hard to be profitable. If I am in Vegas and have to pay 30% tax, you can never be profitable, and that’s why I moved to Vienna, to avoid the poker tax. So goal setting, and reducing expenses is essential, as is my steady income from outside of playing poker.”

And the buy-in levels?

“It’s easy to play EPTs and high rollers, and blow your roll looking for fame, but I am focused on the low buy-ins like €500 or €1000, and if I am playing in a buy-in over €1k, although it’s within my roll, I sell about 50% with markup, and that’s how I reduce the risk. I don’t want to become a millionaire. I want to make a living. I want the money to keep playing.”

I ask Bensimhon to open up about some of his toughest times.

“I was struggling with loneliness when I first made the move.” Said Bensimhon. “Travelling alone isn’t easy. In 2019, I want to travel less, have a more settled life, and make the shift to cash games. Vegas was tough. Everyone wants to go for the experience, but it’s a tough city. If you’re there for 3-4 weeks the city eats you. I will be there for two weeks tops in 2019. I might not even go there. Vegas can harm your roll.”

And does Bensimhon play online poker?

“Not a lot. My strength is reading people, affecting people and getting live tells. To succeed in online poker, you need to be a robot.”

Twitch has allowed online poker rooms to diversify from the standard moulds in the Team Pro storeroom. Bensimhon doesn’t play online, so streaming was never going to be an option for him, but Vlogging was.

The WSOPC gold ring winner knew from the outset that he needed to set himself apart from the crowd. So, he turned up at the tables dressed as a giant turd. At the same time, Bensimhon was very vocal at the table, and in the media about the importance of making poker fun. He began a vlog, and a tribe is forming.

“To build a brand you need to be unique,” said Bensimhon. “You need something that people will notice about you. If you look back through time, Tom Dwan had an aura at the table; Daniel Negreanu was always chatting to people. Tony G and Phil Hellmuth were always ranting. They all had something unique.”

The other thing that I see Bensimhon do well is networking. All those years working at 888Poker has helped him understand the rhymes and reasons that result in a sponsorship deal, and he is putting that experience and insight to good use.

“I have a lot of friends in the media,” said Bensimhon. “I try to be nice to the dealers and the floor staff. They have an important role in the industry, and in the future, you will see them as event managers, and things like that, so it’s important to build those relationships. It’s not only about the brand; you need the results.” 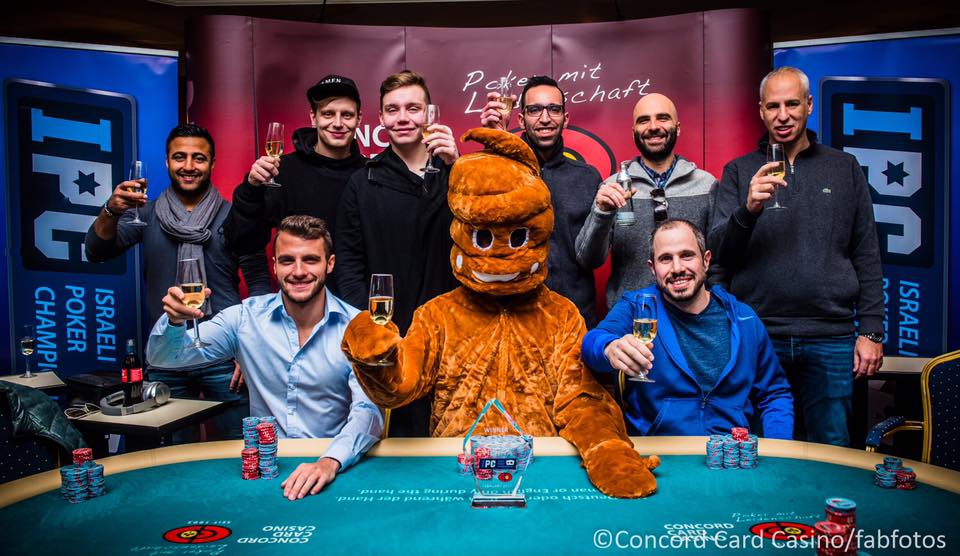 Fortunately, Bensimhon has been getting the results. Are we looking at the perfect storm, or has the 34-year-old been working his proverbials off?

“I didn’t have as much time as I wanted to work on my game in 2018,” admits Bensimhon. “I am hoping to change that in 2019. I learned the live tells at a deeper and deeper level, and that helped me. Watching the speed that people open and close cards has been working out for me in the last few tournaments. I study by watching and analysing the tournaments I have played or videos of final tables, so I do watch and focus on live tells, but not so much about strategy. To change that I am probably going to join a cash stable to help me improve the strategic side of my game.”

You can relate to those numbers.

And when you spend 30-40 minutes talking to the man, you can relate to him.

Bensimhon is proof that you can make it as a semi-professional poker player.

And we all need that proof.

I ask him how poker makes him feel?

“It’s like living the dream,” said Bensimhon. “You are the boss. You get to do the thing you love, and most importantly, poker is a microcosm of life. Everything I practice at the poker table helps me in life. You have bad beats at the poker table, and you have to learn to handle them, and it’s the same with life.”

With players from Israel winning three gold bracelets at the recent World Series of Poker Europe (WSOPE), and talk of legislation on the horizon, online poker rooms should be taking a look at what Eyal Bensimhon is doing, and asking the question: “Is he our man?”

I think he could be.